When on June 18, 2019, Facebook announced the launch of Libra, this event arguably served as the strongest wake-up call to banks that blockchain proponents would eventually find a way to move the technology into the mass market. Some speculated that pressure on bank regulators would force changes to promote adoption.


However, the reality is that regulators were already investigating adoption at that time. Today more than 20 countries—including China and the European Central Bank—are evaluating or experimenting with Central Bank Digital Currency. Further, central banks indeed understand the benefits of digital currency.


Even the Bank of International Settlements, established and owned by 62 central banks worldwide, took a customer-centric view when they wrote, “Central Bank Digital Currency promises to provide cash-like safety and convenience for peer-to-peer payments.”


Cryptocurrency also claims to provide safety and convenience, but with a catch. Safety for users of cryptocurrency was originally related to technological security and not financial stability. In order to qualify as “cash-like” safety, users would have to rely on a consistent value. This is why the concept of a stablecoin, a cryptocurrency pegged to national currency, was created. It ensures that a cryptographically secure asset behaves like national currency.


Do stablecoins really work? Why not adopt the blockchains designed for cryptocurrency to work for national currencies? What’s needed is a new form of Distributed Digital Cash that works better than a stablecoin.


CBDC Architecture at a Glance


Before jumping into CBDC, first let’s consider how banking works today. Think of that physical dollar bill in your pocket.  Each crisp physical note you hold was issued and printed by your country’s central bank. In principle, you can go to the central bank to redeem it. Deposits of physical cash into your chosen bank transform the physical cash into a claim that you hold against your bank (and your bank records this as a liability to you). An account is established, and you receive electronic banking services and easy access to your banks products and services.


How would it work with CDBC? There are basically two variants of CBDC architectures being explored according to BIS:


According to the CBDC architecture, when you take that physical dollar bill to your bank, your bank issues you an encrypted dollar.  And, similar to physical cash, the encrypted dollar is a bearer’s instrument, i.e., you can go to the central bank directly (or indirectly to a commercial bank) to redeem it.  The reality is that the central bank doesn’t want individuals knocking on their front door and so won’t provide customer service, and so of the two models, the Direct CBDC model is less likely to be executed without modification.


To understand stablecoins, it helps to understand how a cryptocurrency transaction typically works. First, a customer buys the cryptocurrency or stablecoins through a transfer to an exchange who manages the clients account (often) for an issuer. The customer has a claim through the exchange to the issuer, who promises to keep the value of a crypto coin as exactly the equivalent value of the original dollar used to buy the coin.


Behind the scenes, converting funds into and out of stablecoins requires additional liquidity. The price of a coin is pegged (maintained) to a fixed price by varying the underlying liquidity levels to adjust to any external changes.  In addition, third party costs for the entity managing the coins must be covered, i.e., the costs for operations, technology and compliance.


None of this helps regulated institutions to solve the real challenge they face -- to both issue national currency and to follow payment and data protection regulations for immutable transactions. It is more elegant -- and practical -- to design DLT solutions from the ground up to fully comply with existing regulations.


Distributed Digital Cash (DDC) transactions do this. DDC is issued by regulated institutions, yet, like conventional cash, it is still a bearer’s instrument. It does not require a separate, third party exchange (just DLT bank accounts so users can manage their funds).


The diagram below highlights the architecture of DDC. 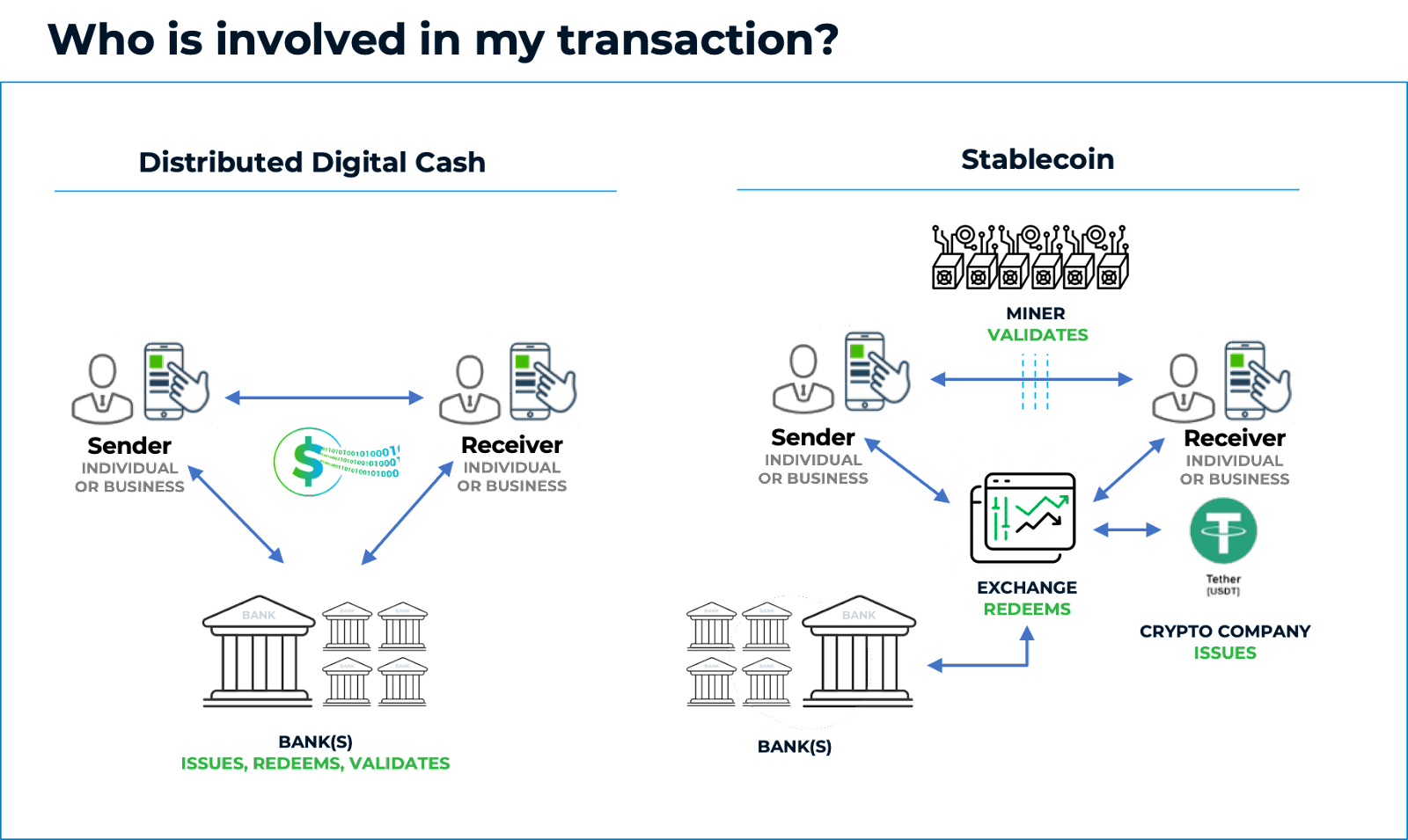 Many still believe  that a stablecoin dollar is no different than a normal dollar, but this is simply not true. Unlike traditional currency cash, stablecoins are classified as a traded security. They have a bid-ask spread and must be issued by a private company. And someone must bear the cost of the exchange(s) in addition to a private party holding reserves to maintain price stability. Ideally, stablecoin assets would be ring fenced and stable as well. Unfortunately, their historic (and recent) valuation and market performance is quite volatile.


Digitized cash is not a “traded security,” it retains a one-to-one relationship to its native currency. It requires no additional liquidity.  What is an encrypted dollar? Simply a digital form of the dollar issued within a permissioned network (public or private) by a commercial bank. The bank does ring-fence the corresponding unencrypted funds (a minimal cost) in an undesignated client monies account. Before, during, and after a transaction, the value of the digitized cash is the same.


As digital transformation accelerates in the post-coronavirus era, both consumers and their financial institutions can benefit from the security and speed that blockchain offers. While cryptocurrencies can provide value in certain use cases, digitized currency is the blockchain technology that addresses the most critical needs for privacy, feasibility and regulatory compliance.


GDPR and other consumer data protection laws often apply to transaction details (rules vary by jurisdiction). Cryptocurrencies are built on distributed architecture which do the very opposite -- they depend on data being shared and processed by distributed nodes, not held private. How can a regulated institution support allowing unauthorized outside processors to handle customers’ personal data (especially since many blockchain networks publicly broadcast those transactions)?


Digitized cash, since it can be issued and governed by the banks (or other financial institutions) themselves, can define its own, GDPR-compliant architecture -- and grant access only to trusted nodes. It’s still a distributed architecture, but it excludes all non-relevant or untrusted nodes. It establishes and defines a mutually beneficial legal relationship between the client and the issuing bank.


If a single transaction with stablecoins is complex, the obstacles multiply at scale. Each and every transaction now requires additional liquidity. Each transaction now must undergo additional processing -- once on the distributed ledgers of particular cryptocurrencies (and remember, a customer could be trading with several different types of stablecoins, each with their own market value). Then, each transaction must also be processed within the traditional ledgers of banks and other regulated financial institutions. Completing foreign currency (FX) exchanges become even more cumbersome, with additional liquidity needed for each national currency.


Shouldn’t payments solutions simplify the process of moving money in and out of currencies, not make it more difficult?


Digital cash requires no additional processing and no additional connectivity. It readily works within the familiar, proven, secure and established infrastructure of banks’ own electronic banking hardware. Digitized cash is interoperable with mechanisms such as ATMs and online banking that already convert physical cash to digital (and vice versa).  In fact, DLT can streamline clearing in the back office between a bank and a provider of physical cash.


Foreign currency transactions are not an issue; they simply utilize the bank’s full balance sheet and the bid/ask spread is minimal.


Digitized currency is significantly more compliant already since it sits on a foundation of bank-friendly architecture. Its nodes and cryptographic key management can be tailored to existing payment and data regulations. And it can authorize nodes that grant access only to trusted parties, or designate levels of authority based on trust determined by the bank.


Digitized currency is not designed to make banks irrelevant but to equip them to adopt and operate in a rapidly changing world. At its core is the vision of a secure, personalized, yet global ecosystem of empowered consumers and trustworthy financial institutions.


Stablecoins will have a place. Many projects are underway around the world and some will likely gain regulatory acceptance and perhaps be cost-effective for banks and financial institutions to lever (or at least process). The technology of digital identity continues to evolve and future iterations may solve privacy issues or unlock new uses and applications for both stablecoins and digitized currency.


What Do You Call It? Blockchain money terms continue to evolve. Here is a primer of essential terms as defined in this article, which may help to provide clarity even as stablecoin and digitized currency solutions vie for dominance.